Skeeters in the Gift Shop

Skeeters in the Gift Shop

Mosquitoes have their place.

Fossil records confirm that mosquitoes existed at least 200 million years ago.  Today we know that they are responsible for such diseases as malaria, yellow fever, dengue, chikungunya, West Nile and Zika. Globally, millions die of mosquito-borne diseases annually.

On the good side--if you can call it the good side--mosquitoes are part of the food chain for some critters. Fish and reptiles, for example, eat mosquito larvae. Birds, bats, dragonflies, damselflies, spiders and other critters eat adult mosquitoes. Female mosquitoes, including the malaria mosquito (Anopheles gambiae) and the yellow fever mosquito (Aedes aegypti) feed on us.

Mosquitoes have their place.

They also have their place in the Bohart Museum of Entomology, located in Room 1124 of the Academic Surge Building, Crocker Lane, UC Davis campus.  In the Bohart gift shop, you can buy insect-themed t-shirts, posters, books and candy. You can buy insect nets, jewelry and stuffed toy animals. Stuffed toy animals? Think educational toys: lice, tardigrades and mosquitoes.

The text with the Culex mosquito is informative: "There are about 3000 species of mosquito, but Culex pipiens is the most common. It is found almost all over the world, except in Antarctica. Spanish for 'little fly,' mosquitoes beat their wings between 300 and 600 times per second. The unnerving sound they create differs from species to species,and listening for the right note helps males and female mosquitoes coordinate their social lives to find suitable mates."

The educational text goes on to say that "wearing long pants and shirts, particularly at dawn and dusk, can help avoid bites in the first place. Mosquitoes are extremely attracted to the carbon dioxide you exhale, and they can detect it up to 75 feet away--so you can also try holding your breath!"

Lynn Kimsey, director of the Bohart Museum and professor of entomology at UC Davis, says the stuffed animal mosquitoes were made by a company in Delaware: Giantmicrobes Inc.

We can see children (future entomologists?) collecting a Culex and placing it next to their teddy bear. Or a teacher using it in her classroom. Or a medical entomologist or entomology student gifted with one.

The Bohart Museum houses nearly eight million insect specimens (including mosquitoes) but a little known fact is that the gift shop is home to some skeeters, too. 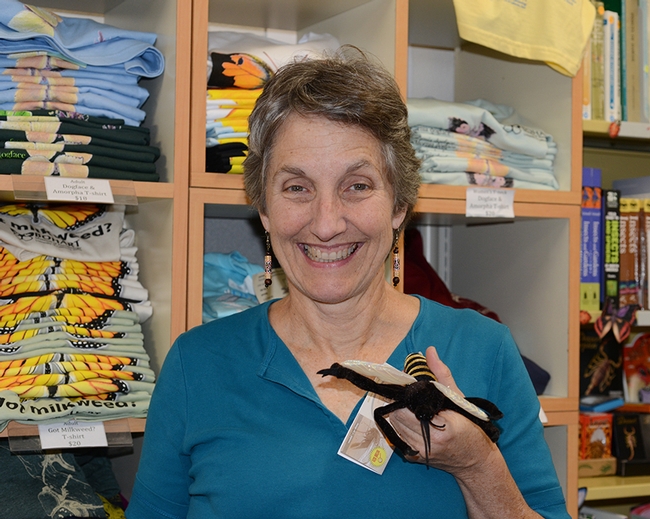 Lynn Kimsey, director of the Bohart Museum of Entomology, with an educational stuffed toy animal, a Culex pipiens. (Photo by Kathy Keatley Garvey)