The Bees-Ness of the Bees "I saw the swarm when I looked out the window," said Vacaville resident Lynn Starner.  She watched dozens of bees buzzing toward the cluster.

Flowering plum branches sheltered and shadowed the swarm's temporary home, while the intrepid bee scouts searched for a permanent one.

A moving swarm is as fascinating as it is remarkable. "The casual observer sees chaos, but in reality it's organized, moving in circles with scouts flying through the swarm, directing it while it travels at about 11 kilometers per hour," writes renowned honey bee geneticist Robert E. Page Jr. of UC Davis and Arizona State University in his 256-page book The Art of the Bee: Shaping the Environment from Landscapes to Societies.

"They don't go far," he writes. "A few bees land on a nearby branch, expose their scent glands located near the tip of the abdomen, fan their wings and blow air over the sponge-like gland spreading a chemical scent through the air. The chemical smells like citrus and attracts the other bees flying in the swarm to land on the branch. The queen alights, and soon the swarm is hanging, locked together foot to foot to body in a football-shaped mass, the swarm cluster. This is an intermediate rendezvous point, a place for a temporary bivouac from which the scouts can operate and find a new, permanent home. Some bees initiate foraging, bringing back supplies to feed the masses, while the scouts branch out and scout the landscape looking for the perfect nest site. The scouts are part hunter, part surveyor and part engineer." The bee swarm, shadowed and sheltered by flowering plum branches, looked like this about an hour after Vacaville resident Lynn Starner saw it on the morning of April 1 on her patio. (Photo by Kathy Keatley Garvey)
Page is an UC Davis alumnus whose administrative career advanced him from professor and chair of the UC Davis Department of Entomology to provost of Arizona State University. He is known for his research on honey bee behavior and population genetics, particularly the evolution of complex social behavior. One of his most salient contributions to science was to construct the first genomic map of the honey bee, which sparked a variety of pioneering contributions not only to insect biology but to genetics at large. Page received the UC Davis Distinguished Emeritus Award in 2019. (See news story)

Honey bees are both artists and engineers, Page writes in his book. As environmental artists, bees are "responsible for the brilliantly colored flowers in our landscapes," and as environmental engineers, they engineer “the niches of multitudes of plants, animals and microbes."

But back to the bee swarm at the Starner home.

Starner contacted a Vacaville beekeeping family, Craig and Shelly Hunt and daughters Alyssa, 13 and Emma, 8. They arrived in the early evening, around 6, to collect the bees. Before the COVID-19 pandemic hit, Craig taught 4-H'ers (including Alyssa and Emma) the art of beekeeping.

"It was a huge swarm," Shelly said. "We filled two boxes."

The bees are now thriving in the Hunt family's apiary on Meridian Road.

It's bees-ness as usual for the Hunts.

And home, sweet home for the bees. 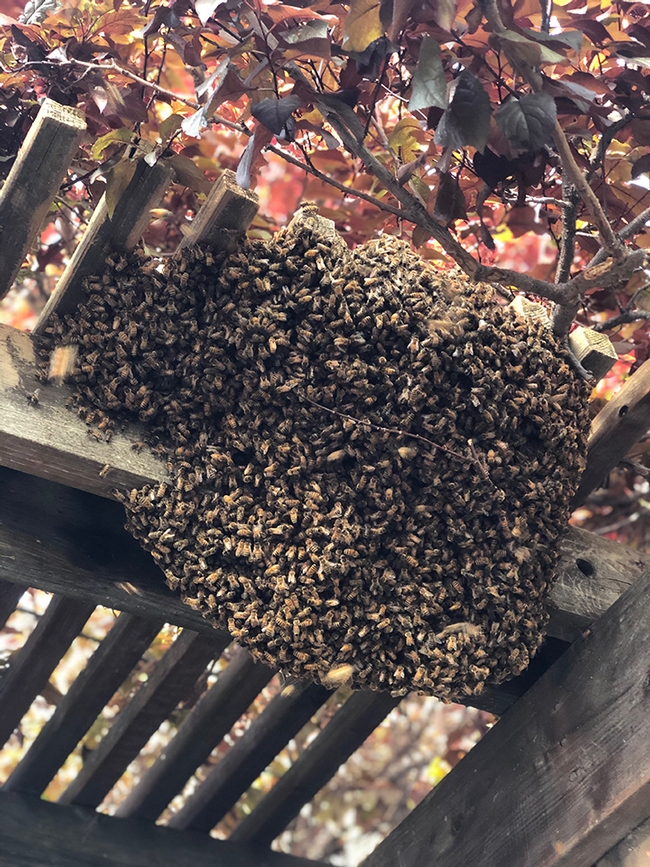 Around 6 p.m., April 1, the bee swarm at the Starner home looked like this. (Photo by the Craig and Shelly Hunt family) 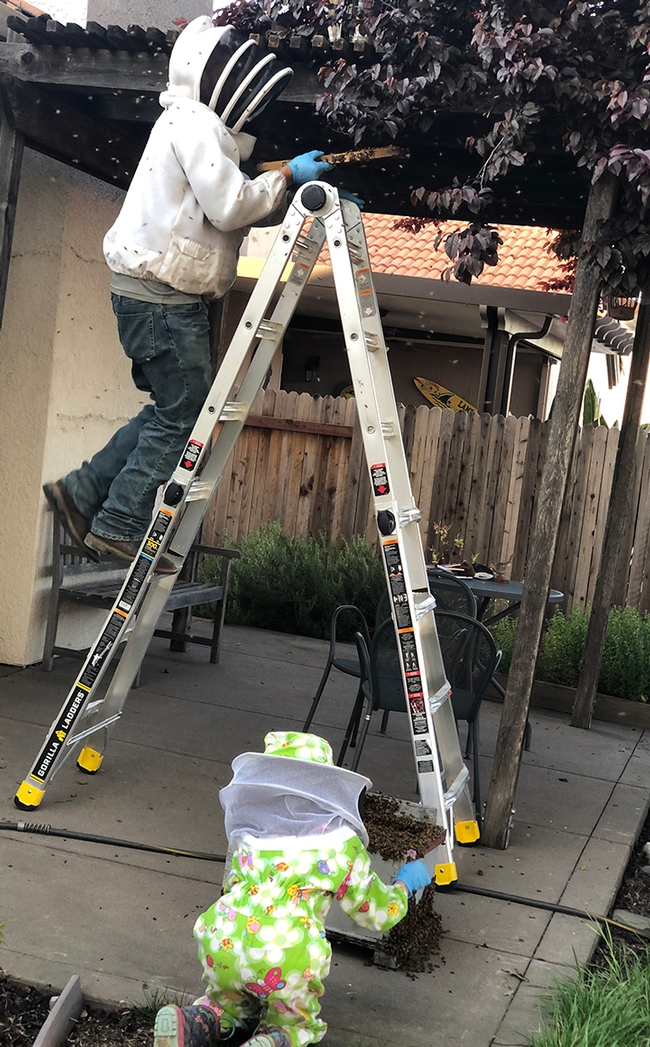 Beekeeper Craig Hunt (on ladder) and his daughter, Emma, 8, work to retrieve the bee swarm. Emma learned beekeeping from her father, who taught 4-H beekeeping prior to the COVID-19 pandemic. (Shelly Hunt Photo) 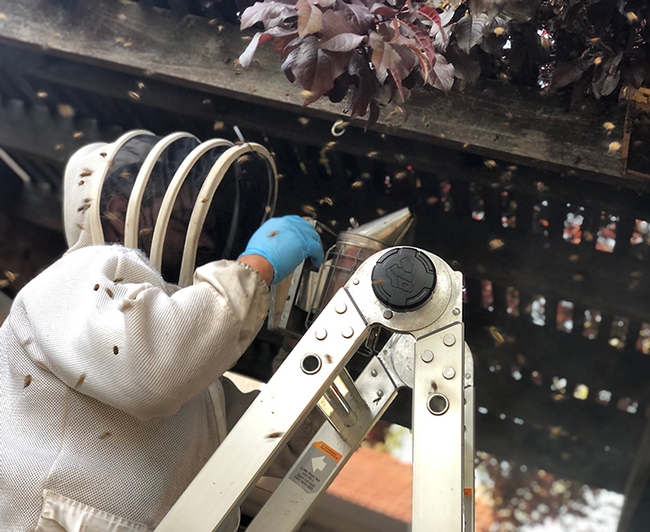 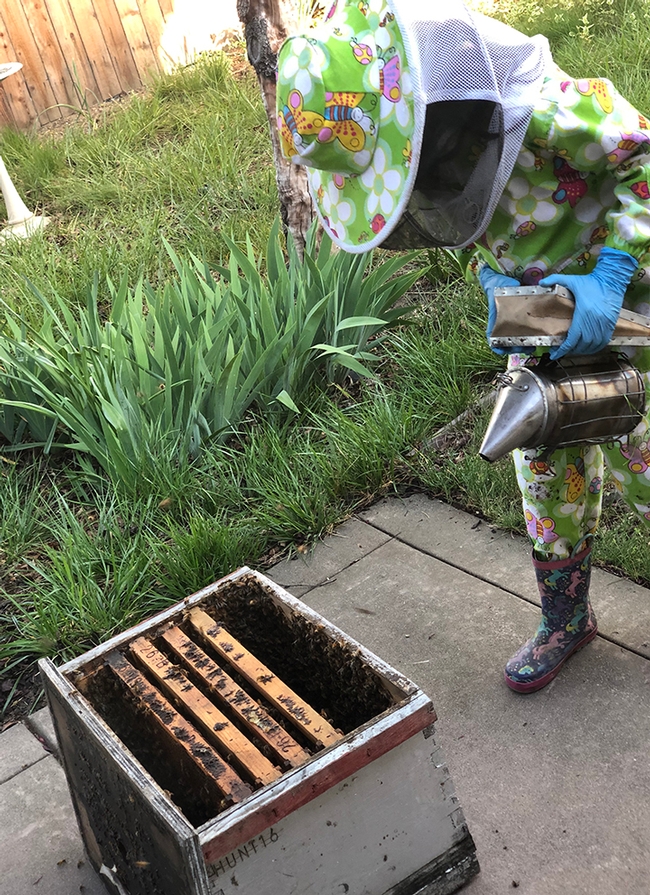 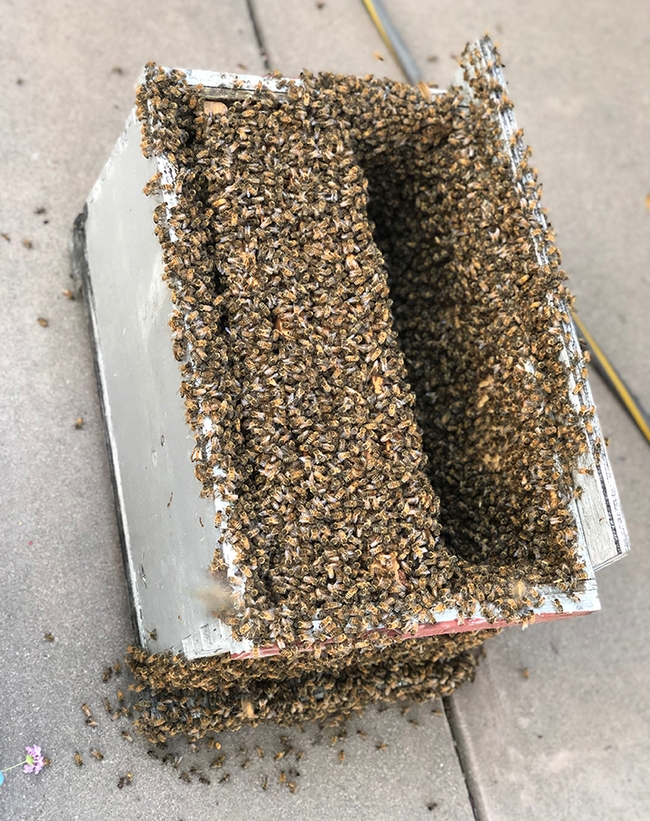