The Red Coats Are Coming

No, not an army of soldiers. Soldier beetles.

These insects (family Cantharida) resemble the uniforms of the British soldiers of the American Revolution, which is apparently how their name originated. They're also called "leatherwings" in reference to their leatherylike wing covers.

Soldier beetles are beneficial insects; they're the good guys and gals in the garden. The adults eat scores of aphids. In addition, they are pollinators. So, don't even think of killing soldier beetles. Enlist them in your garden to feast on aphids.

"The adults are long and narrow," according to the UC Statewide Integrated Pest Management Program (UC IPM), which labels them as natural enemies of garden pests.  "Common species are often about 1/2 inch (13 mm) long with a red, orange or yellow head and abdomen and black, gray or brown soft wing covers. Adults are often observed feeding on aphids or on pollen or nectar on flowering shrubs and trees. Metamorphosis is complete. Larvae are dark, elongate, and flattened. They feed under bark or in soil or litter, primarily on eggs and larvae of beetles, butterflies, moths, and other insects.  There are over 100 species of soldier beetles in California."

If you want to know identify some of the natural enemies of garden pests, you can download UC IPM's educational poster, "Meet the Beneficials: Natural Enemies of Gardens" here.

The poster illustrates some of the beneficial insects, mites and spiders that prey on garden pests:

These soldier beetles may even know how to pull rank. 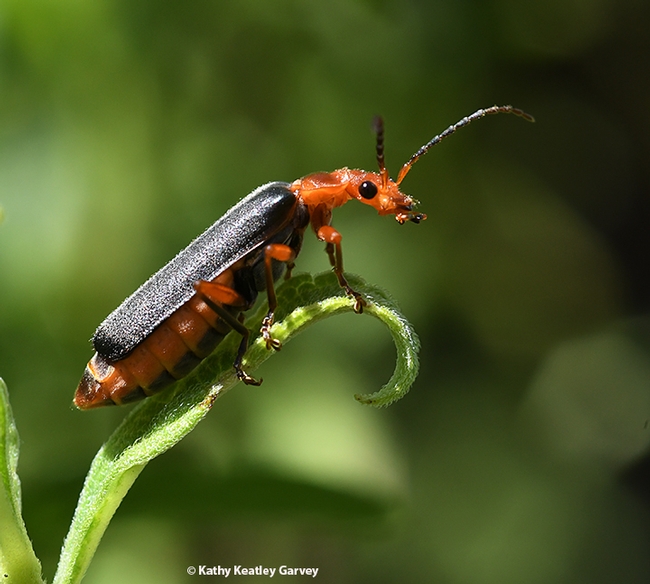 A soldier beetle (family Cantharida) looks out over a milkweed in search of more aphids. (Photo by Kathy Keatley Garvey)