Co-editors-in-chief of the journal Insect Systematics and Diversity are Jason Bond (right) of UC Davis and Hojun Song of Texas A&M. (ESA News Release)
The Department of Entomology and Nematology at the University of California, Davis, is in the news today, and what wonderful, exciting news!

Jason Bond, UC Davis professor of entomology and the Evert and Marion Schlinger endowed chair in insect systematics is a newly selected co-editor-in-chief of the journal Insect Systematics and Diversity (ISD), published by the Entomological Society of America (ESA).

He and Hojun Song, an associate professor of entomology at Texas A&M University, will serve a four-year term, starting Jan. 1. They succeed founding editors Sydney Cameron and James Whitfield, both professors of entomology at the University of Illinois, Urbana.

ISD, launched in 2017, publishes research on systematics, evolution, and biodiversity of insects and related arthropods, including comparative and developmental morphology, conservation, behavior, taxonomy,molecular phylogenetics, paleobiology, natural history, and phylogeography. The journal is heralded for its cutting-edge research, according to an ESA news release issued Oct. 12.

"Dr. Song and Dr. Bond are esteemed leaders in their areas of research, and their knowledge and experience with the evolving techniques in systematics, evolution, genomics, and beyond make them ideal for this role,"  ESA President Michelle Smith said in the press release. "My fellow ESA Governing Board members and I are pleased to welcome them aboard, and we look forward to seeing them build upon the excellent foundation that Dr. Cameron and Dr. Whitfield have established."

ESA vice president Jessica Ware, who chaired the search committee, praised Bond and Song for their "experience and enthusiasm" for advancing the journal. "They both impressed the committee with their editorial skill, scientific expertise, and commitment to ESA's mission and vision for its family of journals. ISD aims to publish high-impact, integrative research, and I'm confident the journal will be in good hands." (See news release.)

Jason Bond. Bond joined the UC Davis Department of Entomology and Nematology faculty in 2018 from Auburn University, Alabama,  where he directed the Auburn University Museum of Natural History (2011–2016), and served as professor and chair of the Auburn Department of Biological Sciences (2016–2018). He specializes in the evolutionary diversification of terrestrial arthropods, specifically spiders, millipedes, and tenebrionid beetles. (See Bond laboratory.)

Bond holds a bachelor's degree in biology (1993) from Western Carolina University, and two degrees from Virginia Tech:  a master's degree in biology (1995) and a doctorate in evolutionary systematics (1999). He began his career as a research associate at the Field Museum of Natural History in Chicago in 1990. His credentials include associate editor of Systematic Biology (2019–present) and editor of New World Mygalomorphae for Zootaxa (2016–present).

Hojun Song. Song holds three degrees in entomology: a bachelor's degree (2000) from Cornell University and both his master's (2002) and doctorate (2006) from Ohio State University. He began his career as a research fellow in 2006 at Brigham Young University, and then served as an assistant professor and curator of the Stuart M. Fullerton Collection of Arthropods, University of Central Florida, before joining the Texas A&M faculty in 2015. He was named editor-in-chief of the journal Insect Systematics and Evolution in 2014. He specializes in arthropod systematics, biodiversity and evolution. (See Song laboratory.)

"I am honored to be selected as a new co-editor-in-chief of Insect Systematics and Diversity, and I am excited about the possibility of moving the field of insect systematics in this new capacity," Song told ESA. "The inaugural co-editors-in-chief, Drs. Sydney Cameron and Jim Whitfield, have done a tremendous job launching the journal. Dr. Bond and I have some big shoes to fill, but we will do our best to make sure that ISD continues to become an outlet for publishing the best work in insect systematics, evolution, and biodiversity."

A tip of the insect net to the new co-editors-in-chief! 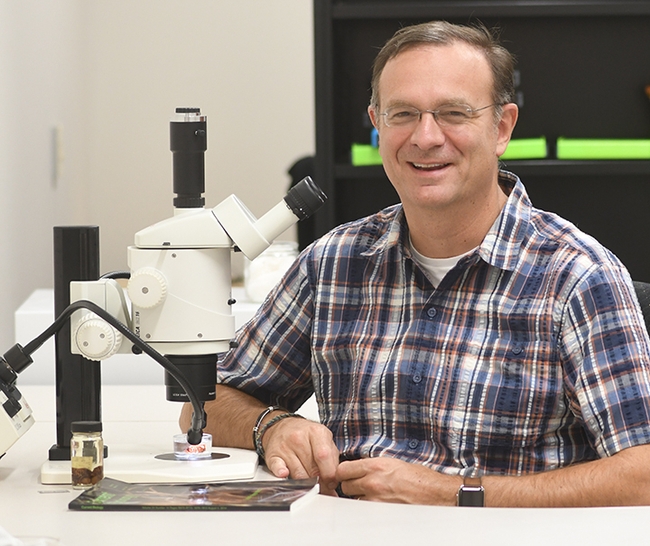 Jason Bond,professor of entomology and the Evert and Marion Schlinger endowed chair in insect systematics, UC Davis Department of Entomology and Nematology, is a newly selected co-editor-in-chief of the journal Insect Systematics and Diversity (ISD), published by the Entomological Society of America (ESA). (Photo by Kathy Keatley Garvey)