Megan Meuti's Way of Tricking Mosquitoes Into Not Biting You

Megan Meuti's Way of Tricking Mosquitoes Into Not Biting You She's hoping she can trick Culex pipiens, the Northern house mosquito, into not biting us.

As a recent OSU article on Can We Trick Mosquitoes So They Stop Biting Us? explained:

"In her lab, Meuti employed a technique called RNA interference. She injected several thousand Culex pipiens mosquitoes with double-stranded RNA. (RNA stands for ribonucleic acid, which can serve as a messenger, carrying genetic information from the DNA inside an organism's cells and allowing it to be made into the proteins that do all the work.)

"The double-stranded RNA that she injected into the mosquitoes prevented a specific protein that governs the mosquitoes' circadian rhythms from being made.

"Then Meuti waited. She hoped to see if reducing the amount of a circadian clock proteins had any effect on the mosquitoes' ability to measure seasonal time. Specifically, she wanted to see if she could convince a mosquito that it was winter when it was really summer — and vice versa."

Did it work? Yes. Culex pipiens, the Northern house mosquito, feeding on a human host. (Wikipedia photo)
Meuti will discuss her work on Wednesday, Jan. 19 when the UC Davis Department of Entomology and Nematology hosts her virtual seminar on "How Do Mosquitoes Correctly Interpret Environmental Signals Into Complex Seasonal Responses?"

"Northern house mosquitoes, Culex pipiens, transmit West Nile virus to birds and people in the United States," Meuti says in her abstract. "However, transmission is limited to a few months of the year when female mosquitoes are actively biting and reproducing. During autumn, females of Cx. pipiens enter a physiologically dynamic but arrested state of development known as diapause where they divert resources from reproduction to survival."

Meuti and members of her lab study (1) how mosquitoes are able to measure daylength and whether the circadian clock is involved and (2) how human-mediated changes to the environment, like light pollution and higher temperatures in urban heat islands, affect mosquito seasonality, and how this might affect disease transmission in cities.

Meuti holds three degrees from OSU:  dual bachelor degrees in microbiology and entomology, 2008; and her doctorate in  entomology, 2014. Studying with major professor David Denlinger, she completed her dissertation on "Circadian Clocks and Photoperiodic Diapause in the Northern House Mosquito, Culex pipiens: Search for the Missing Link.”

Prior to joining the OSU faculty, Meuti served as a visiting professor in the Department of Biology, Kenyon College, Gambier, Ohio, in 2015-16.

"Many of us intuitively recognize that our mosquito problems are seasonal; there are times of the year when mosquitoes are abundant and we cannot go outside without getting bitten (e.g. late spring and summer), while there are other times when we enjoy a reprieve from mosquito bites (e.g. late fall and winter)," Meuti writes on her website. "I am interested in how precisely mosquitoes are able to tell what time of year it is and appropriately respond to their environment. Members of my lab group study how circadian clock genes might allow mosquitoes to measure day length to determine the time of year; how male mosquitoes change their accessory gland proteins to influence female behavior and physiology; and whether mosquitoes in urban environments are active for longer periods during the year and/or bite humans more frequently. We use a variety of molecular, genetic and physiological techniques to investigate these questions. Our ultimate goal is to uncover specific ways to manipulate seasonal responses in insects so that we can more effectively control them."  (Watch Megan Meuti's  Discovery Talk)

"Urban light pollution caused by artificial light at night (ALAN) profoundly affects the ecology, behavior, and physiology of plants and animals. Further, this widespread environmental pollutant has the potential to negatively impact human and animal health by changing the seasonal dynamics of disease-transmitting insects. In response to short days, females of the Northern house mosquito enter an overwintering dormancy, or diapause. While in diapause, female mosquitoes divert energy away from reproduction, cease blood-feeding, and no longer transmit disease. We demonstrate that exposure to dim ALAN (~4 lx) causes female mosquitoes to avert diapause and become reproductively active, as these females acquired less fat content, developed larger egg follicles, imbibed vertebrate blood, and produced viable eggs and larvae. Our findings suggest that mosquitoes in highly light-polluted areas such as cities may be actively reproducing and biting later in the season, thereby extending the period of disease risk for urban residents. Our results suggest that ALAN should be considered when modeling mosquito abundance, disease risk, and when deciding how long mosquito surveillance and control should persist in temperate regions."

Coordinator of the UC Davis seminars is nematologist Shahid Siddique, assistant professor. For technical issues involving the seminar, contact him at ssiddique@ucdavis.edu. 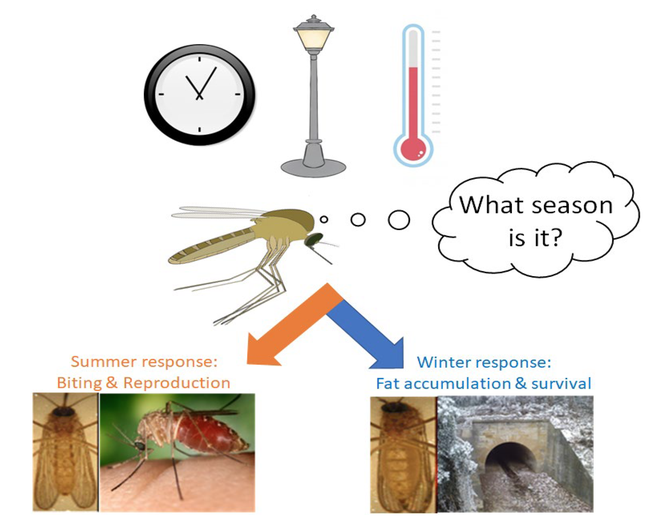 An illustration from Megan Meuti's presentation.