Remember those "long lost" silver digger bees found last week at the San Francisco Presidio? They hadn't been seen in large aggregations for nearly a century.

And yet there they were in the newly restored sand dunes at the Presidio, a former military post now owned and operated by the National Park Service.

UC Davis entomologist Leslie Saul-Gershenz lent her expertise when a volunteer discovered the thriving colonies of bees. An authority on digger bees, she confirmed that they are Habropoda miserabilis and were probably common in the sandy dunes of that area as late as the 1920s. When non-native ivy, eucalyptus and ice plants took over their habitat, the bees disappeared.

“The discovery of a thriving native bee colony on the western side of the Presidio is the latest example of how the removal of invasive plants and the restoration of dunes and grasses at the former military base have helped bring back coastal habitat that thrived in San Francisco for tens of thousands of years before the city was built,” said Saul-Gershenz, who received her doctorate in entomology from UC Davis and is now associate director of research for the Wild Energy Initiative, John Muir Institute of the Environment, on campus.

“I am very happy to see this nest site at the Presidio,” she said. She's worked on the biology, chemical ecology and parasite interactions of this group of bees in the genus Habropoda for many years--on research trips that have taken her to the Oregon coast and the Mojave desert, among others.

“This nest parasite M. franciscanus was originally described from the dunes in San Francisco near Lake Merced by Van Dyke in 1928,” Saul-Gershenz said. “It is presumed to be locally extirpated in San Francisco due to habitat alteration. However its host bee, H. miserabilis  appears to have finally found a suitable nest location in a sand dune area being restored by the Presidio Trust in the Presidio National Park.  The resiliency of nature provides hope for the future.”

In a news story published in the San Francisco Chronicle on March 29, science reporter Peter Fimrite quoted the UC Davis entomologist as saying that the silver digger bees were “all but gone” by the mid-20th century.  However, Saul-Gershenz has kept looking for them. In fact, she collected one near Baker Beach in 1998.

With restoration, comes hope for the return of native plants and insects.

"Biologists have reported a more than tenfold increase in the number of native plants in the Presidio, including at least four that are federally listed endangered or threatened, among them the Presidio clarkia," wrote Fimrite. "The Franciscan manzanita, which was believed to be extinct in the wild, was discovered in the Presidio in 2009. It was the first of its kind seen in its native San Francisco since the old Laurel Hill Cemetery was bulldozed in 1947 and paved over for homes."

Gershenz and collaborator Jocelyn Millar of UC Riverside and others deciphered the sex attraction of Habropoda miserabilis and the deceptive mimicking blend used by its nest parasite Meloe franciscanus working with a population on the coast of Oregon (Saul-Gershenz et al. 2018). They documented a new parasite-host location system while conducting research on related species in the same genus Habropoda pallida found in the Mojave and Sonoran Desert (Saul-Gershenz and Millar 2006).

The comeback of silver digger bees is not limited to San Francisco. Fimrite related that several other areas in California are are witnessing comebacks, including Bodega Marine Reserve in Bodega Bay and Lanphere Dunes in the Humboldt Bay National Wildlife Refuge.

We remember seeing volunteers at Dillon's Beach, Bodega Bay, last summer removing ice plants by the bird sanctuary, and in the process, giving native plants, native insects and related wildlife a chance to thrive. We remember beachcombers asking "Why? Why are they doing that? Those ice plants are so PRETTY."

The discovery at the Presidio is why.

As Saul-Gershenz points out, there are 1600 native bee species in California, but scientists know little about many of them.

They are all pollinators. And all life is connected.  As naturalist/environmental philosopher John Muir (1838-1914) wrote in My First Summer in the Sierra: "When we try to pick out anything by itself, we find it hitched to everything else in the Universe."

So it is with the silver digger bees. That's why they're gold. 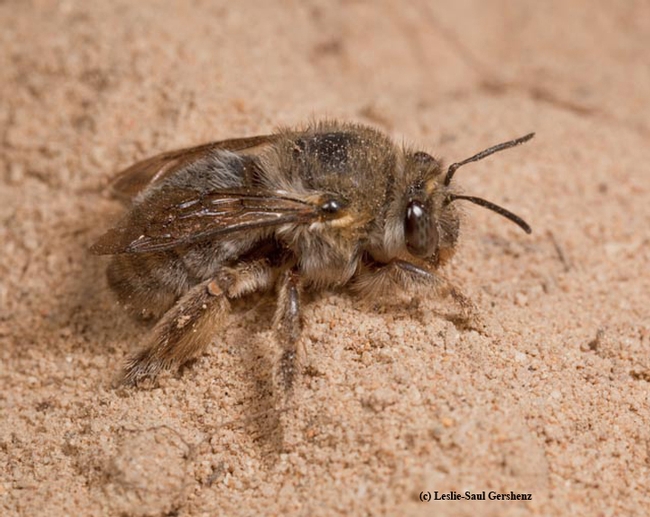 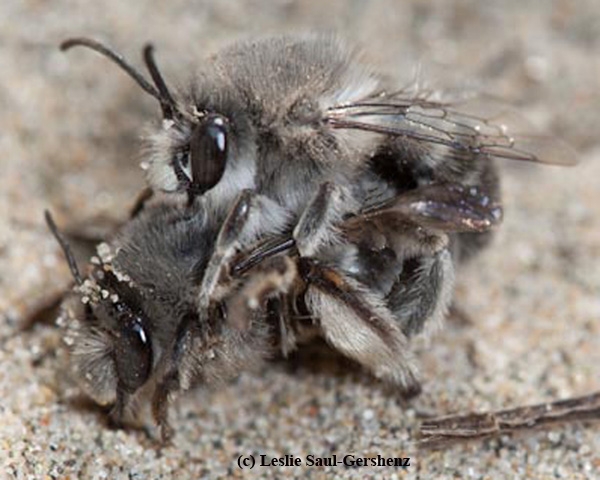 Habropoda miserabilis male and female—the male is mate-guarding the female after mating with her, preventing her from mating with other males. (Copyrighted photo by Leslie Saul-Gershenz. Used with permission)

This graphic, the work of Leslie Saul-Gershenz, details information on the male and female of the species.