Targeting the Mexican Fruit Fly and Other Tephritid Pests The invasive species, repeatedly introduced in California and eradicated, "was first found in Central Mexico in 1863, and by the early 1950s flies were found along the California-Mexico border," according to the USDA. "The pest has since been detected in Arizona, California and Texas. A large number of commercially grown crops, including avocado, grapefruit, orange, peach and pear, would be threatened if the Mexican fruit fly became established."

The California Department of Food and Agriculture's fact sheet relates that:

One of the scientists who does research on the genomics of this fruit fly and other pests in the family Tephritidae is Julian Dupuis, an assistant professor at the University of Kentucky. He'll speak on “Developing Genomics-Based Molecular Diagnostic Tools for Recurrently Invading Tephritid Pests”  at a seminar hosted by the UC Davis Department of Entomology and Nematology on Wednesday, Oct. 12 in 122 Briggs Hall.

“With increased global trade and transport, anthropogenic movement of non-indigenous, pestiferous species is becoming more coming,” Dupuis writes in his abstract. “Effective management and prevention of these invasions relies on accurate species identification and geographic pathway analysis (that is, what is it and where did it come from?) However, many of these pests belong to highly diverse groups of closely related species that are difficult or impossible to delimit using traditional taxonomic methods, and traditionally used molecular markers have proven ineffective for these tasks. Here, I will present ongoing efforts to use genomic data to inform and develop molecular diagnostic tools for the highly diverse and economically damaging true fruit flies of the family Tephritidae. These efforts combine foundational phylogenomics and population genomics with highly applied uses of these data for phytosanitary purposes, with the ultimate goal of providing highly sought after tools to regularly agencies such as USDA-APHIS."

Dupuis received his bachelor's degree in biology in 2009 from Northern Michigan University and his doctorate in systematics and evolution in 2016 from the University of Alberta. His research interests include insect systematics, speciations, evolution, genomics, phylogenomics and population genomics.

“We are broadly interested in insect speciation and systematics and use an integrative approach to study these phenomena with a large emphasis on genomic approaches,” he writes on his website.

He served as the lead author of research, "Range-Wide Population Genomics of the Mexican Fruit Fly: Toward Development of Pathway Analysis Tools," published in May 2019 in the journal Evolutionary Applications.

Emily Meineke, assistant professor of urban landscape entomology, UC Davis Department of Entomology and Nematology, coordinates the department's seminars for the 2022-23 academic year. All 11 seminars will take place both person and virtually at 4:10 p.m. on Wednesdays in Room 122 of Briggs Hall except for the Nov. 9th and Dec. 7th seminars, which will be virtual only, she said.  (See list of seminars)

For further information on the seminars or technical difficulties with Zoom, contact Meineke at ekmeineke@ucdavis.edu. 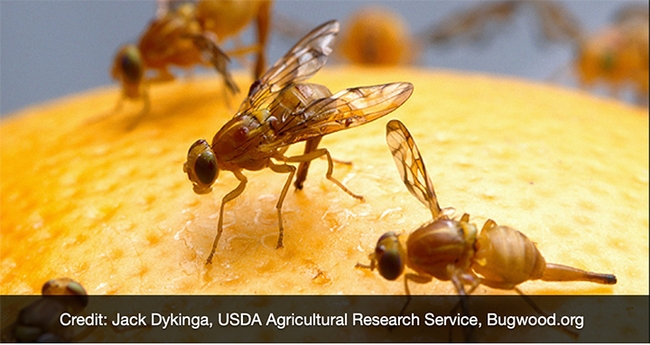 The Mexican fruit fly is a serious pest of grapefruit and mango.