A Good Day for a Praying Mantis

It was a good day for a praying mantis.

It was not a good day for a honey bee.

Here's what happened in the "Daily Insect News": a gravid praying mantis, Stagmomantis limbata, ambushed and ate a honey bee on a Mexican sunflower, Tithonia rotundifola, in a Vacaville pollinator garden.

In this image, of a mantis snacking on a bee, do you know which one is a native of the United States and which two are not?

The plant? It's a non-native. It's native to Mexico and Central America.

The honey bee? It's a non-native. European colonists brought the honey bee (Apis mellifera) to what is now the United States in 1622.  Specifically, they arrived at the Jamestown colony (Virginia). Factoid: The Native Americans called the honey bee "the white man's fly." Another factoid: California had no honey bees until 1853 when a beekeeper brought his colonies to the San Jose area.

And the praying mantis, Stagmomantis limbata? It's considered native to North America, particularly prevalent in the southwestern United States. Commonly known as "bordered mantis, "bosque mantis," "Arizona mantis" or "New Mexico praying mantis," it is green or light brown and can reach three inches in length, according to Wikipedia.

Never once--not once--have we seen this species grab and dine on a stink bug, milkweed bug or lygus bug.

Maybe a little menu planning is in order, Ms. Mantis? Maybe you should check out the UC Statewide Integrated Pest Management Program site to determine which is a pest and which is a beneficial insect?

Nah, just kidding...everything in the garden must eat to survive. 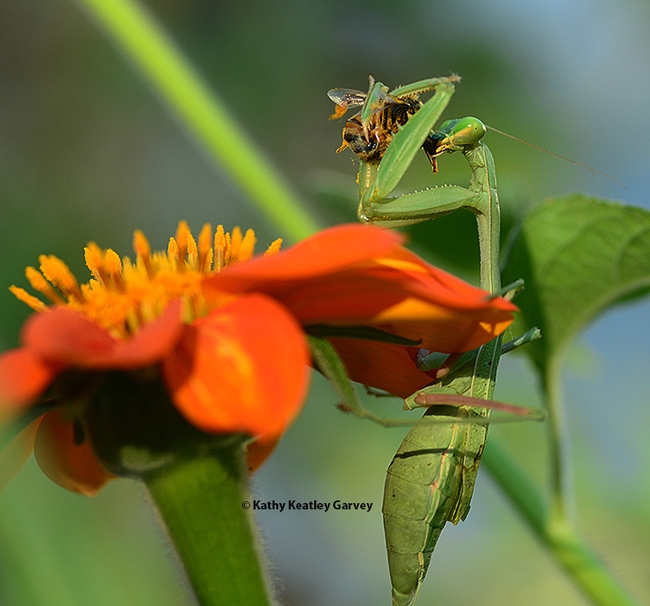