Madeline Handy, a student in the Research Scholars Program in Insect Biology, originated the research on gut bacteria of carpenter bees.
When Professors Jay Rosenheim, Joanna Chiu and Louie Yang of the UC Davis Department of Entomology and Nematology launched the Research Scholars Program in Insect Biology (RSPIB) to give undergraduates closely mentored research experiences in biology, the innovative projects have simply been outstanding.

A recent example: RSPIB scholar Madeline Handy, an undergraduate student and research intern in the laboratory of community ecologist Rachel Vannette, originated the research about exploring gut bacteria in carpenter bees and the results are now published in the journal Molecular Ecology.

The work focused on two species of carpenter bees, the Valley carpenter bee or Xylocopa sonorina, and the mountain carpenter bee,  Xylocopa tabaniformis, from multiple geographic sites in their range, said Vannette, corresponding author and an associate professor in the UC Davis Department of Entomology and Nematology.

The research suggests that “sociality may not be the main driver of microbiome structure in bees as is often assumed,” Vannette said. “Maddie sampled carpenter bees from Davis--with locations crowdsourced using NextDoor--and she traveled to Anza Borrego to sample bees from this preserve, under a grant supported by the University of California's Natural Reserve System,” Vannette related. “We also received samples from collaborators in Tucson so that we could compare if the microbiome of the two carpenter bee species differed across a broad range in the southwest United States.”

The researchers sequenced the microbial communities “using technology that produces longer reads from microbial DNA and allows us to get a better picture of the microbes that are found in the crop and gut, as well as their relatedness to each other,”  Vannette said.

“We found that bacterial species in the gut are consistent and predictable among individual bees while bacteria in the crop are more variable and reflect what the bees have been eating.” Vannette said. “We also found that the main gut bacteria were found in bees throughout the range of the species. The surprising part was that carpenter bees are not eusocial yet their gut contains a microbiome of a social bee. We speculate that carpenter bee's long lives and limited social interactions, may help to maintain this consistent and 'social' microbiome.” Community ecologist Rachel Vannette (Photo by Kathy Keatley Garvey)
The significance of the research? “Social bees have a gut microbiome that's a model for human gut microbiomes—microbes contribute to digestion in the gut, affect host immunity and physiology in both bees and humans,” Vannette said. “But a key question is how do these types of microbiomes form and what maintains them? Social interactions has been posed as a major driver but this study suggests that advanced sociality is not required for the maintenance of this type of microbiome. Second, we show that long-read amplicon sequencing can be used in novel ways to generate hypotheses about how microbes are transmitted and maintained within insects.”

Next Steps. The next steps? “We would love to know what are these bacteria doing and if they are beneficial to bees. Our lab is excited to explore how bacterial and fungal communities in bee GI tract, stored food and other insect life stages like larvae or pupae may contribute to bee nutrition and health.”

“The gut microbiota of bees affects nutrition, immunity and host fitness, yet the roles of diet, sociality and geographical variation in determining microbiome structure, including variant-level diversity and relatedness, remain poorly understood. Here, we use full-length 16S rRNA amplicon sequencing to compare the crop and gut microbiomes of two incipiently social carpenter bee species, Xylocopa sonorina and Xylocopa tabaniformis, from multiple geographical sites within each species' range. We found that Xylocopa species share a set of core taxa consisting of Bombilactobacillus, Bombiscardovia and Lactobacillus, found in >95% of all individual bees sampled, and Gilliamella and Apibacter were also detected in the gut of both species with high frequency. The crop bacterial community of X. sonorina comprised nearly entirely Apilactobacillus with occasionally abundant nectar bacteria. Despite sharing core taxa, Xylocopa species' microbiomes were distinguished by multiple bacterial lineages, including species-specific variants of core taxa. The use of long-read amplicons revealed otherwise cryptic species and population-level differentiation in core microbiome members, which was masked when a shorter fragment of the 16S rRNA (V4) was considered. Of the core taxa, Bombilactobacillus and Bombiscardovia exhibited differentiation in amplicon sequence variants among bee populations, but this was lacking in Lactobacillus, suggesting that some bacterial genera in the gut may be structured by different processes. We conclude that these Xylocopa species host a distinctive microbiome, similar to that of previously characterized social corbiculate apids, which suggests that further investigation to understand the evolution of the bee microbiome and its drivers is warranted.”

Handy, who is pursuing her master's degree in public health, says her interest is “in all things microbiome, but I'm particularly interested in women's health and nutrition when it comes to the microbes living in our bodies.”

Sbardellati is interested in understanding how microbial ecology shapes macroscale ecology. In the Vannette lab, he studies bacteriophage (viruses which target bacteria) communities associated with the bumble bee gut and how phages shape gut microbial communities.

The Vannette lab is a team of entomologists, microbiologists, chemical ecologists, and community ecologists trying to understand how microbial communities affect plants and insects, and sometimes other organisms as well. 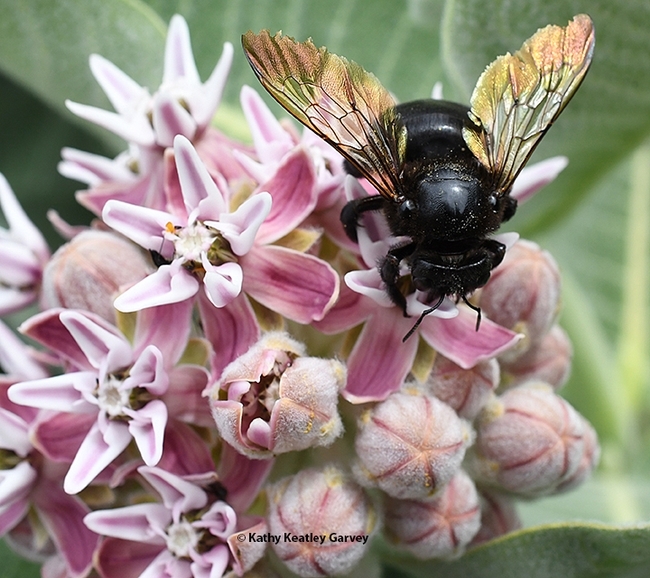 A female carpenter bee, Xylocopa sonorina, also known as the Valley carpenter bee, forages on showy milkweed, Asclepias speciosa. This is one of the bees that the Rachel Vannette lab studied. (Photo by Kathy Keatley Garvey) 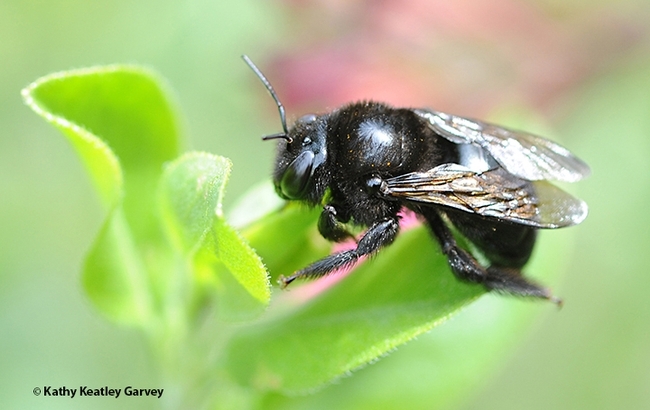 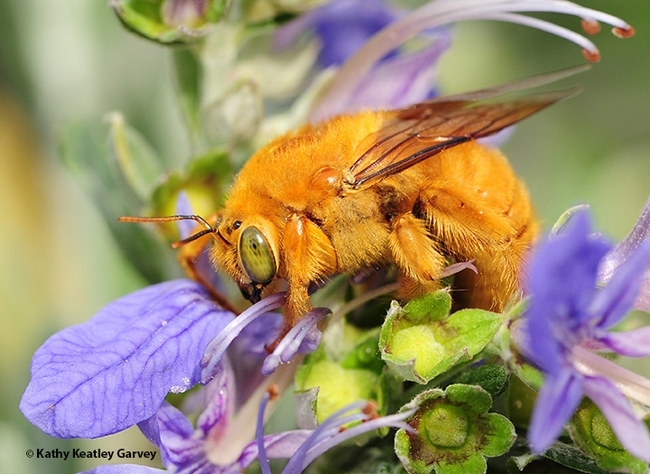 The UC Davis research included both genders of the two carpenter bees. This is a male Xylocopa sonorina, nicknamed "the teddy bear bee." (Photo by Kathy Keatley Garvey)